Please  allow me to introduce author S. M. Spencer on the occasion of the release of her new murder mystery MURDER AT THE CREEK. I asked her a few questions about it.

G.W.: What inspired you to become an author, and how old were you at the time?

S.M.: I think I first wanted to become an author at around the age of twelve. We read a lot when we were kids—the normal horse books, and Winnie the Pooh, and Nancy Drew. But following them came books by both Mary Stewart and Daphne du Maurier – both also known as the Queens of Romantic Suspense. I also read a lot of fantasy and science fiction, but it was the magical writing of Daphne du Maurier that really got me hooked.

G.W.: If you could tell your younger self something you know now, with respect to your writing career, what would it be?

Start sooner. I wanted to be a writer when I first went to University, but I didn’t really know enough about life so I ended up switching to business. I do believe that what I did was the right thing for me, but I could have been writing short stories and building a small author platform even while I was still working full-time. They say the best time to start building your author platform is ten years ago! So, younger self, start building that author platform!

G.W.: Where are your books set?

S.M.: To date my books are all set in places I have lived or spent a great deal of time in.

The Copperhead Creek series is set in semi-rural Australia, in the Golden Triangle. I had owned a house in the area at one stage, and had considered moving there to become a writer, but things changed and the house got sold. However, I love the area and felt really good about writing my stories in the fictional town called Willows.

My vampire/ghost trilogy is set in Melbourne, near the Queen Victoria Market. I worked in the area for several years and learned a lot about the history of the market and surrounding parklands. The Flagstaff Gardens is where the main character spends a lot of time. It also happens to have been Melbourne’s Burial Hill in the early 1800s. Some scenes are set in the San Francisco Bay Area – where I was raised.

G.W.: Around six months ago, I stumbled on a FB group called “Clean Indie Reads.” It’s full of authors and editors and that’s also where I learned of you. Can you tell me about CIR and how it has helped you?

S.M.: I’m not certain how long I’ve been in the group, but I’d say I’ve been lurking and participating in discussions for a few years now. Being part of this friendly, helpful and ever so knowledgeable group has definitely kept me motivated to keep going, and I am grateful to have found them.

The people in the group are supportive, friendly, helpful, encouraging … they listen, they provide feedback, they commiserate, and they cheer. You can go there with a technical problem and get help. You can go there with a small win, and get a virtual high-five. You can be down in the dumps after a bad review, and others will remind you that it is just the opinion of one reader, and that we all get them. There are experts on most things to do with writing and there is always someone happy to offer their advice with writing a blurb (which, I have to admit, is my LEAST favourite part of writing!) or designing a book cover or creating a new website. I’ve found beta readers, joined in group promotions, and attended parties (on the internet)

I’ve gotten an incredible amount of enjoyment and encouragement from being included in the group and I seriously don’t know if I’d have come this far if I hadn’t found them.

S.M.: My latest book, Murder at the Creek, is a mystery. Set in the same small town of Willows, this is book six in the Copperhead Creek Australian Romance series, but can be read as a standalone book. The main character is the town cop, Sergeant Rob Andersen. It’s Valentine’s Day, and he’s got plans for the first time in his life. So of course those plans get skittled. He’s got a murder to solve, and a woman he wants to hang onto. Can he do both?

This is my first venture into mystery, and I had a lot of fun writing it. It’s a bit darker than my previous books, mostly because it’s a murder mystery, and someone has to be the bad guy, right? The book has some sexual and substance references (although there are no explicit scenes) and has a bit of mild language (you know what teenagers are like!) but no graphic violence (even though there is a dead body).

At the age of five S M Spencer’s life changed when she was plonked onto a black & white pony for a photograph. From that day on all she wanted was a horse. She spent the next eleven years writing stories about the horses she pretended to ride through the rolling hills of coastal California until she got a job and bought her first horse at the age of sixteen.

In the 1980s her life changed again when her employer offered her a role in Australia. This was the beginning of an adventure of which she has never tired.

Still living in Australia she now writes from the semi-rural home she shares with her husband, horses, cats and dogs–not to mention the kangaroos that share the paddocks with the horses from time to time.

Her current series is the Copperhead Creek Australian Romance series. This is clean Australian contemporary small-town/rural romance set within the Golden Triangle outside Melbourne.

She has also written a clean YA paranormal romance trilogy, Absent Shadows, which is set mostly in Australia. 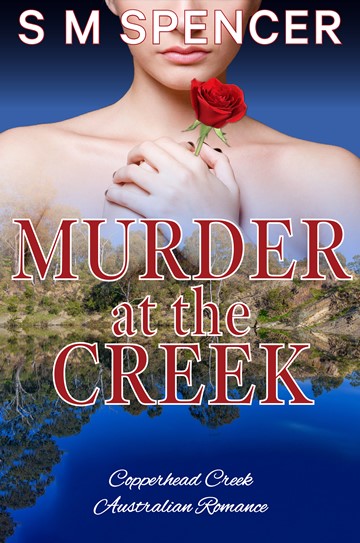